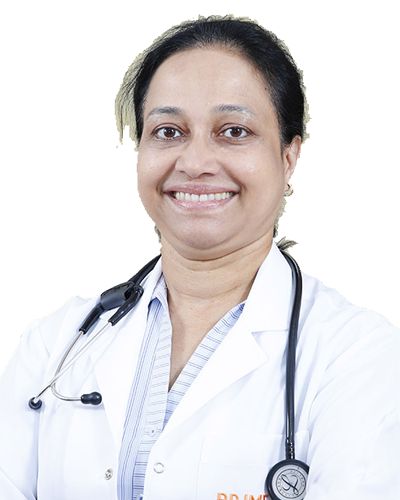 Dr. Sandhya Shenoy graduated (MBBS) from the prestigious T.D. Medical College (University of Kerala) with Gold Medal as Best Outgoing Student in 1989.  In 1990, Dr. Shenoy completed her Doctor of Medicine (M.D.) in General Medicine in 1993 from the same college and underwent the three-year residency program in different subspecialties of medicine like Cardiology, Neurology, Gastroenterology, Pulmonology and Hematology. She has also submitted research papers in Neurology and attended various medical seminars and conferences.  In 1994 she obtained her DNB - Diplomate of National Board in Internal Medicine from National Board of Examination, New Delhi, India. In 2002 she obtained her MRCP - Membership of Royal Colleges of Physicians in Internal Medicine from the United Kingdom. In 2013 she obtained her PG Diploma in Diabetes from Cardiff University, United Kingdom. In 2016 she obtained her MRCPS (Glasg) - Membership of Royal Colleges of Physicians and Surgeons of Glasgow from the United Kingdom.