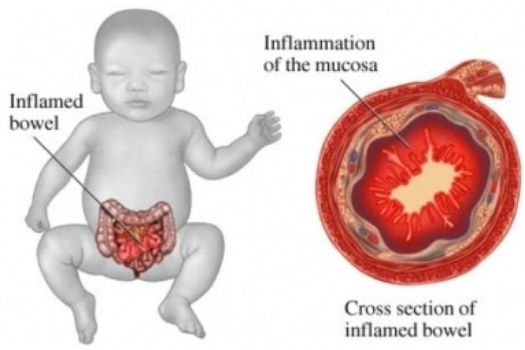 RK, a male preterm baby (30+ Weeks) who was born to a 29-year-old first time mom, was one of the recent preterm infant newborn babies that suffered complications with Necrotizing Enterocolitis (NEC) cases handled by our Prime HC Group Staff members.

NEC is a serious medical condition that mostly affects very low birth weight (VLBW) infants. Affecting 6-8 percent of VLBW babies, this disease remains a major unsolved medical challenge for which no specific therapy exists. Despite progress in technology, there has been no method to identify infants who will progress to severe stages, hence, the need for more new and innovative therapeutic approaches to the disease.

In RK’s case, the baby cried soon after birth, but owing to poor respiratory efforts he needed intubation and ventilation. He was admitted to the neonatal intensive care unit (NICU) for management of prematurity and respiratory support.

He was given an IV ampicillin and gentamicin owing to high risk of infection but these were later discontinued after 48 hours, as he remained well. His sepsis screen and sterile blood culture were eventually found to be normal, while his initial chest x-ray was unremarkable. The baby was later extubated to a noninvasive ventilator and commenced feeds on day five. On day seven, however, he was diagnosed with a abdominal distension that was rapidly progressing to a shiny red abdomen with increased gastric aspirates.

To make the diagnosis, doctors normally conduct a series of physical examinations, laboratory tests, and abdominal X-rays. RK’s doctors initially ordered withholding food and fluids and the baby was given antibiotics but there was still rapid deterioration in his clinical condition over a period of  hours.

In the subsequent 72 hours, due to features of disseminated intravascular coagulation (DIC), he underwent blood, fresh frozen plasma, and platelet concentrates infusion. Supportive treatments with immunoglobulin was given. Within 24 hours, his abdominal distension was noted to have gradually resolved and once he was noted to be hemodynamically stable along with improving platelet counts, normalized coagulation profile with declining CRP levels and sterile blood culture.

RK then underwent laparotomy with resection and anastomosis of his intestine and formation of ileostomy. One perforation was noted at duodenojejunal junction and multiple perforations were noted proximal to ileocecal valve. An approximately 15 centimeters of bowel resection was performed followed by end-to-end anastomosis. The histopathology of the bowel specimen sent revealed NEC.

Generally speaking, once it has been fully ascertained that the infant is suffering from NEC, physicians order parenteral antibiotics, nasogatric decompression, parenteral nutrition, fluid resuscitation, and other newly emerging therapeutic strategies. They will also ask to stop regular feeding by mouth. Following his diagnosis, RK underwent the necessary treatment and management of the disease for his recovery and healing.

What could be learned from RK’s case is that prematurity is the single greatest risk factor for NEC and avoidance of premature birth is the best way to prevent NEC. The role of feeding in the pathogenesis of NEC is uncertain, but it is prudent to use breast milk, when available, and advance feedings slowly and cautiously.

Bioinformatics modeling is a new emerging strategy aimed at understanding the dynamics of various inflammatory markers. The application of this procedure is the step in the right direction in terms of early diagnosis and treatment and high recovery rate.